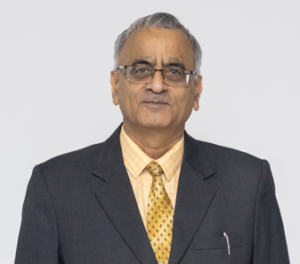 40 years. 6 years in bank and 34 years in General Insurance and reinsurance.

He has joined Oriental Insurance as Direct recruit officer in 1987 and worked in various capacities in the business operations at the Branch office and Divisional offices till 2004. Under his leadership, his offices showed excellent results in terms of business growth, customer service and excellent profitability. During his tenure, loss making offices has shown improved performance with good profitability. He has sound knowledge of IT systems and its implementation.

He was posted as Deputy Chief Executive Officer from April 2004 to December 2012. During this period, he was instrumental in computerizing the business operations. Oriental insurance, Nepal achieved handsome business growth and shown profitable results during his entire period of posting.

He was posted as CEO at the end of June 2015 after two devastating earthquakes that caused immense damage and loss to Nepal. He has to deal with challenging situation caused due to these two massive earthquakes when insurance industry was facing huge earthquake claims. He handled this tough situation efficiently without any grievance from customers. During his tenure of almost four years, Nepal office of Oriental progressed very well and has grown by more than 50%. The Company has shown remarkable excellent results on all parameters e.g. profitability, claim settlement and other customer service parameters during this period.

He was a member of Nepal Terrorism Pool technical committee and claim committee. This pool was later converted as Nepal Reinsurance Company.

He was nominated by Beema Samiti in various technical Committees for promotion of insurance knowledge in Nepal. He was a member of Marine Tariff Advisory Committee that finalized Nepal Marine Tariff. He was a member of   Committee that finalized Nepal Property Directives in the year 2018. Nepal Insurance Institute was formed during this period where he was nominated as regular faculty to help to enrich insurance knowledge of Nepal insurance industry.

His last assignment has been as CFO and Head of Reinsurance department of Oriental Insurance Company at its Corporate Office in India till June 2021.

He has extensive knowledge of Nepal Insurance Market – as he has worked as Deputy CEO and then CEO of Oriental Insurance Company Nepal in various capacities.