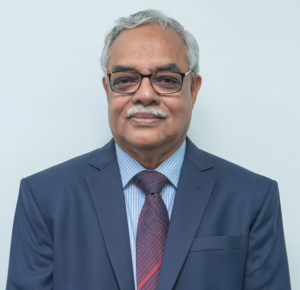 During the three decades of his career with GIC Re (1978-2008), he handled almost all the functions in GIC Re and was instrumental in many far-reaching strategic business decisions in the Corporation. During his tenure as General Manager, International business portfolio gained significant momentum and GIC of India rose from 34th rank to 16th rank amongst Global Reinsurers (by premium income).  He successfully obtained A – Excellent rating from AM Best to GIC Re (in 2004) and later on to Kuwait Re (in 2009).

He set up GIC Re office in London UK in 2001. He has travelled extensively in all the continents for reinsurance business development. He played a key role in obtaining Regulatory approval from FSA UK to function -fledged Branch operations of GIC Re in London, UK.  He was instrumental in establishing the international network of offices for GIC of India (in London, Middle East, Malaysia, Moscow and provided the blue print for GIC Re’s South Africa operations and Brazil.

He is known for his innovation in Reinsurance solutions in the Indian and Middle East markets.  He has provided expert guidance and advices to many Insurance and reinsurance companies in India, Bhutan, Middle East and Mauritius as well as ERM Diagnostic analysis to Qatar Insurance Group and Strategic advices to an US Equity firm on a South American Reinsurance Company financials.

He was appointed as Secretary General of General Insurance Council in India in 2011 in which role he served up to July 2019. He transformed G I Council into a Self-Regulatory Organization advising non-life insurance industry on sound conduct and best practices.  His contributions in India in respect of    Insurance Act, 2015, and in the amendments to the key Regulations of the IRDAI that followed, and his relentless efforts for incorporating legislative provisions for expeditious settlement of Motor Third Party liability insurance claims in Motor Vehicle Act 2019 are noteworthy.

He served as a Member of Insurance Advisory Committee of IRDAI, constituted under Insurance Act. This Committee would meet regularly to advice the Regulator on all Life insurance and Non-life insurance Regulations and amendments being proposed by the Authority to regulate insurance business.

Board Member of LIC of India

Recognizing his contributions to Indian Insurance Sector, Govt. of India appointed him as a Non-Official Director on the Board of Directors of Life Insurance Corporation of India in October 2017 for a period of three years.  In this capacity, he had contributed to various strategic initiatives of LIC of India.

His career in India, UK and Middle East Insurance and Reinsurance markets has enabled him to gain a unique identity amongst the Reinsurance professionals.